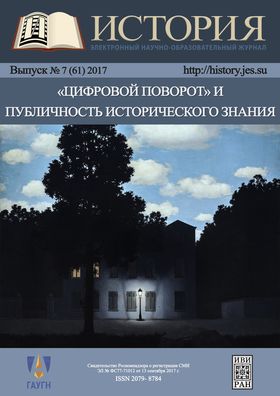 “Digital turn” is a steady increase in the number of digital information sources that exceedingly affect different areas of expertise. The digital sources play the highly significant role in history now. The problem of the “digital turn” in history has become one of the key topics of the International Congress of Historical Sciences in 2015. The relevance of this problem is associated with a new technological challenge: the “digitization” in history ceases to be just a technical procedure, and becomes a kind of information modeling. The possibility of using historic databases, geographic information systems, three-dimensional reconstructions and other computerized models depend on the quality of documentation and verification of the information contained therein. Modern web-technologies allow to make many historical sources available not only to professionals but also to everyone — the public begins to play a significant role in the evaluation of historical information, because they do not hesitate to ask trivial and strange questions, which do not always have simple and straightforward academic answers. The coexistence of two online worlds — the world of researchers and the world of enthusiasts — opens up new opportunities for the publicity of historical knowledge, however, it poses new questions about the possibilities and limits of professional historical knowledge.

In this issue materials are grouped into three thematic blocks. The first block consists of the articles dedicated to digital public history, in the first article Serge Noire gives the definition to this field. Other articles are focused on such online projects as “Prozhito”, “OpenList”, “Timebound”, “Project1917”. The politics of memory in the online environment is examined, the historical culture of participation in social networks is described, the creation of smart photo archive is discussed, comparative analysis of scientific-educational Internet resources of historical orientation is performed, the definition of the digital practices in the Humanities is given.

The second block consists of the materials dedicated to the practical applications of historical geographic information systems. Øyvind Eide addresses the theoretical problem of verbal expressions of geographical information; large-scale historical maps are considered in the context of the "digital turn", the feudal acts on land ownership studied in the Tverskoy district of the XVI century, the settlement of Karelians in Tver are explored in the 17th — 19th  centuries, and GIS-publication of the urban boundary plan from the late 18th century are described.

The third part presents a study on quantitative history: socio-professional profile of the members of the State Council of the Russian Empire is compiled, full-text database “Memories of the workers of mechanical factories of br. Bromley and metallurgical plant Goujon” is examined, the records on the early printed Cyrillic books of the 15th — 18th centuries are observed, the structure of export of the Russian Empire is investigated, and the capabilities and limitations of quantification the Great divergence are described.

Aleksandra Kasatkina
Digital Practices of Scholars in the Humanities: the Results of an Online Survey

Andrei Volodin
From Сollection of Рhotos to a Smart Archive: Enthusiasm and Distributed Knowledge about Post-Soviet Public Transport

Sergey Kutakov
The Settlement of the Tver Karelians in 17th — 19th Centuries: the Study by GIS-Technologies