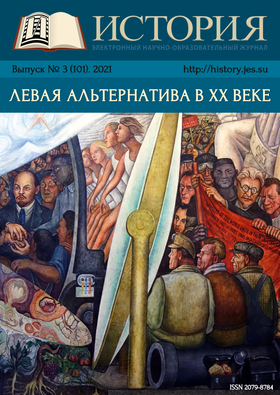 In this issue, the authors are united by an interest in this twentieth century feature, in the manifestations of leftist thought and practice based on different cultures and in the sphere of different institutions and social structures. The works presented here are an invitation to the dialogue of the widest circle of historians-specialists and the public interested in a new view of the “short” 20th century, which still dominates our daily life in the first decades of the 21st century. In addition, works devoted to national themes of the history of the left will undoubtedly become a serious contribution to the study of the civil history of these countries.

Anton Andreev
“Either with Russia or against Russia!” Communists and Anarchists in Chile and the Bolshevik Revolution and the Soviet Regime (1919—1927)

German Gigolaev
The Art of Protest: Artistic Opposition to Francoism

Ekaterina Grantseva
Opposition behind Bars: the “Communist Sector” of the Verkhne-Uralsk Political Isolator in the 1930s

Aleksey Gusev
Japanese Socialists in 1918—1923: Between Reformism, Bolshevism and Anarchism

Nikolai Ivanov
The Left and the Working Class in Argentina, 1890—1945: a Comparative and Relational Analysis

Irina Kukushkina
The Institute for Marxist Research in Chile: Expectations and Limitations of a Communist Intellectual Project

Alla Morozova
The French Communist Party, the Soviet Union and France during the Crises of 1968

Georgy Filatov
Mongolia Between Absolutism and Communism: the Start of the Way (1921)

Sergey Lyubichankovskiy
“There is Something Inevitable, Fatal in Our Relations to the Orient…”: Yevgeny Frantsevich Shmurlo and Asian Russia

Mikhail Kovalev
“Russian Mission in Persia”: Content and Interpretation of the Concept in the Late 19th and Early 20th Century

Velikhan Mirzekhanov
Senator Joseph Irvine France: Politician Who Showed the Way to Cooperation Between the USA and Russia