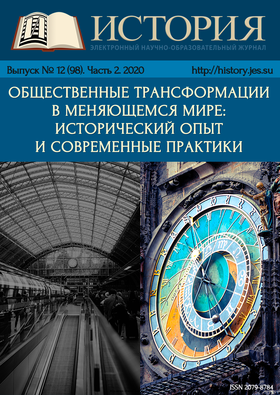 The new issue of the Journal is devoted to a wide range of issues in the world history of Modern and Contemporary eras. The articles are thematically grouped around topical issues of intellectual and cultural interactions, international relations, and the dynamics of social and economic processes. They are intended to show the complexity and multifaceted nature of relations between the global and the local, to outline cross-plots in the relations of various countries and peoples. Thus, the prospects for further development of transnational history as a research area are clearly outlined. Articles in the issue are grouped according to the problem-chronological principle.

Much attention is paid to issues of historical memory and the politics of history. The authors attempt to analyze the roots of memorial barriers that exist today, as, for example, in the case of Japan's relations with its closest neighbors. The presented research goes beyond the usual Eurocentric approach and, on the contrary, gives an idea of memorial disputes and conflicts, politics of history, and forms of constructing collective memory in other regions of the world, primarily in the East. The articles on the specific features of Turkish historical memory, including the politics of history in modern-day Turkey are an example.

A prominent place is given to global economic processes. The readers are invited to give their careful attention to the section devoted to the world system of Socialism of the second half of the twentieth century and its inclusion in the global economy. The authors analyze the correlation of political conjuncture and pragmatic expediency between countries, reveal little-studied stories from the past of economic contacts, as in the case of studying the relationship between the COMECON and the so-called “global South”. It should be noted that the articles are based on unique archival sources that are being introduced into scholarly use for the first time.

A separate group of articles is devoted to the problems of constructing mutual images and crossing historical and cultural identities. The authors focus on issues of Russian-French and Russian-American relations, the formation of ideas about the Other against the backdrop of deep political transformations and conflicts (for example, images of Francoist Spain in the USSR, or images of the USSR in American cinema during the Cold War).

The problems of intellectual contacts are reflected in articles on the history of science and research methodology. Thus, the authors raise important questions about the relationship between the global and the local in the processes of historical research, the formation and use of regional terminology, and the great challenges and opportunities for scientific and technological development in the context of global digitalization.

The problems of regional development in the context of political, ideological, and technological transformations of the second half of the twentieth century are raised in several articles. The authors try to understand how certain countries and peoples react to these transformations, and what responses are being formed. Hence the close attention to such locomotives of modern development as India and China. At the same time, researchers are trying to answer questions about the place of the West in modern processes, to understand how historical experience either allows to or hinders from giving apt responses to the rapidly changing global context and new challenges, such as terrorism.

Thus, the presented articles give a broad view of the key issues of transnational history, mainly in the context of intellectual and socio-economic history. They will be of interest to a wide range of specialists, not only due to theirspecific content and conclusions, but because of the opportunity to rethink seemingly well-studied issues and identify new research problems.

Issue publications 12-2 (98)
Author(s)
The Oath to the Heir of the Throne of the Spanish Monarchy (17th — 18th Centuries): Oath and Ceremonial

Ekaterina Yurchik
The Worlds of Piri Reis: the Sea as Part of the Imperial Space of the Early Ottoman Empire

Alim Abidulin / Ekaterina Kozub
Letters from the General Chief of Police A. M. Devieir to Prince A. D. Menshikov from 1718 to 1727: Experience of the Content Analysis

Mikhail Kovalev
Fashion Industry of “Russian Harbin” in 1917—1939. On the Problem of Mutual Cultural Influence

Aleksandr Zaitsev
The 1941—1945 Plans for Post-War Settlement in South-Eastern Europe: the Problem of Federation

Alexey Manukhin
Indeanizm and Indian Education in Bolivia: the Contradiction of the Nationalist Isolation and Inter-American Solidarity

Vitaliy Naumkin / Vasily A. Kuznetsov
The Specifics of Political Modernization in Modern India: Between Progress and Regression

Natalia Emelyanova
India-Us Relations: from the Past to the Future