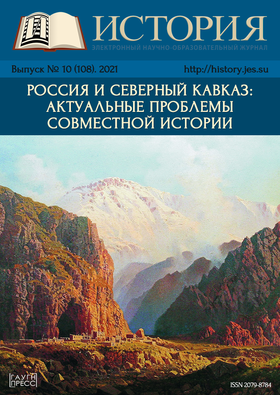 The issue is dedicated to the history of the North Caucasus as a part of the Russian state in the 18th — 21st centuries. The published articles discuss the consequences of the North Caucasus incorporation into Russia, the contradictions of modernization and integration processes in the region, heroic and tragic events in the history of its peoples sometimes preserving their traumatic character. Among the authors, there are researchers from scientific and educational institutions not only from the Central Russia, but also from all the North Caucasus regions, as well as from other countries. Therefore, the issue can serve as a good case in point of a joint search for answers to debatable questions of the common history by representatives of various scientific schools and trends.

The structure of the issue includes four main sections. The first presents three articles, the authors of which consider the process of formation of historical knowledge about the North Caucasus, the possibility of developing a common approach to the study of its history (A. H. Borov), the formation of national Caucasian studies (T. A. Kolosovskaya and D. S. Tkachenko) and the results of modern studies of the demographic, historical and anthropological consequences of wars and armed conflicts for the region population (E. F. Krinko).

Articles of the second, largest section characterize various aspects of the incorporation of the North Caucasus peoples into the administrative-legal and sociocultural space of the Russian Empire (Sh. A. Magaramov, A. H. Abazov, R. M. Begeulov, O. V. Matveev), the population migration during and after the Caucasian War (A. T. Urushadze), transformation of relations and preservation of traditions in mountain societies (A. K. Cheucheva, M. B. Gimbatova). Much attention is paid to the activities of the imperial administration in the social policy (P. A. Kuzminov), education (A. Yu. Peretyatko, N. A. Trapsh, O. I. Shafranova), formation of a new symbolic space (N. V. Dmitrieva).

The next section includes articles that reveal the history issues of the North Caucasus in the context of social and political transformations of the 20th century — Civil War (A. S. Puchenkov, T. H. Matiev), national-state transformations within the first Soviet decades (A. V. Averyanov and A. E. Batyrov), the Great Patriotic War (A. I. Tetuev, A. Yu. Bezugolny). It also presents publications on the situation of the inhabitants of the North Caucasus in the special settlement and the reflection of their fates in memoirs (A. S. Musagalieva, E.-B. M. Guchinova).

The fourth section consists of articles based on materials from the North Caucasus in the 1990s — 2000s, they are dedicated to socio-political processes (A. D. Osmaev, С. Drue), the religious situation (N. V. Kratova), historical memory and symbolic politics (V. A. Sсhnirelman, E. M. Goryushina).

Aslan Borov
Russian Militaries at the Commencement of the Caucasus Studies: from the Region Pacifying to Its Survey (19th — Early 20th Centuries)

Dmitry Tkachenko / Tatiana Kolosovskaya
Wars and the Population of the North Caucasus in the 19th — 21st Centuries: the Results of the Study of Demographic and Historico-Anthropological Issues

Evgeny Krinko
The Peoples of the North Caucasus in the Administrative and Legal and Socio-Cultural Space of the Russian Empire
The Russian Empire in the Western Caspian Region in 1722—1735: Management Experience

Amiran Urushadze
Problems of Integration of Karachay into Russia: the August Uprising of 1855

Rustam Begeulov
“Head of the Chechen People”: Petr Bellik in the History of the Incorporation of the Highlanders to the Russian Office in the North Caucasus

Petr Kuzminov
Avar Linguistics in the Novocherkassk Gymnasium in the 1850s — 1860s: the Experience of the Incorporation of the Caucasian Highlanders into the Imperial Cultural Space

Svetlana Khubulova
Centenary of the Patriotic War of 1812 in the North Caucasus: Memory and Politics

Alim Tetuev
“Fighters-Dzhigits, Having Drawn Blades and Daggers, Shook Them in the Air...”: the Combat History of the 115th Cavalry Division in the Light of New Sources

Elza-Bair Guchinova
In Search of Answers to the Challenges of Modernity: Political Transformations and Historical Memory
Socio-Political Processes in the Chechen Republic in the Context of the Counter-Terrorist Operation (1999—2009)

Natalia Kratova
The Alans between a Scholarly Paradigm and Ethnocentrism: the “Memory Wars” and Their Background

Cécile Druey
The Memory Policy in the Caucasus after 1989: a Theoretical Basis for the War Narrative in Chechnya

Evgeniya Goryushina
Reviews
Under the Banner of the Prophet? Terek and Dagestan in the Flames of the Civil War

Maria Fyodorova
Scholarly Life
Special Session of the Institute of World History of the Russian Academy of Sciences at the 13th RISA Convention: Changes in the Research Field of the History of the Cold War