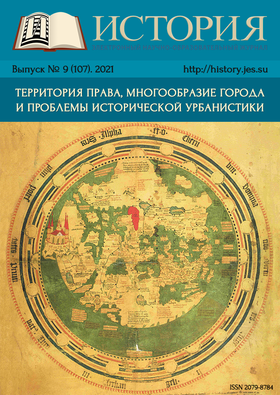 The Territory of Law, Diversity of a City, and Problems of Historical Urban
Editors: Pavel Uvarov
820 RUB / 10.0 SU

The Diversity of a City

The phenomenon of the city of the Middle Ages and the Modern times, with an emphasis on the city’s space and the formation of the urban environment, is presented in this issue from different angles. Studying the poetic description of the construction of Aachen as the second Rome by Charlemagne, M. S. Petrova examined the formation of the medieval ideology of the unity of the City and the power of its creator. Analysis of the segregation laws of the Crown of Aragon of the 14th century allowed I. I. Varyash to reveal the relationship between a genetically heterogeneous city and social strategies aimed at limiting the rights of the infidels. A unique opportunity for the Middle Ages to study the projects of city charters, which did not become official laws, allowed P. A. Blokhin to consider the social change in Freiburg in the 13th century. M. O. Smagar studied the images of urban space in miniatures of the Book of Hours of Isabella the Catholic of the 15th century. E. N. Kirillova turned to the interpenetration of the professional and urban environment in Reims in the 16th and 18th centuries. I. Yu. Novichenko analyzed the principles of co-operative housing construction in the cities of Great Britain in the 1860–1870s, aimed at creating “healthy homes for workers”.

A number of papers are devoted to the history of Eastern European cities in the 9th — 18th centuries. A. S. Shchavelev carried out a historical and typological comparison of the two capitals of chiefdoms: the ancient Bulgarian Pliska, the center of the polity of the Krumids of the 9th century, and the ancient Russian Kiev, the center of the polity of the Rurikids of the 10th century. In the paper by I. G. Konovalova a comparative analysis of information about the cities of the Crimean peninsula in the works of Arab geographers of the 12th — 14th centuries al-Idrīsī, Ibn Sa‛īd al-Maghribī and Abū al-Fidā’ is performed. M. V. Karpova and Yu. V. Stepanova examined the features of the territorial, administrative and settlement structure of Toropets and Toropetsky uyezd in the system of the Grand Duchy of Lithuania and Moscow at the end of the 15th — 16th centuries. The paper by A. A. Akasheva is devoted to the analysis of the estate structure of Nizhny Novgorod according to the General Survey of 1784.

The section is devoted to the study of understanding the territorial boundaries in medieval and early modern law. What connections between law and territory as a physical space were allowed by the inhabitants of Western Europe and Russia during this period? What was the reception of Roman law for them and was it an effective legal tool for the settlement of disputes? What were the ways of migration of different legal traditions inherent in ethnic, confessional and territorial communities in the Middle Ages? Is the phenomenon of legal pluralism relevant for the Middle Ages, could different legal systems really existed and co-existed within the same geographical area? How they got along with each other, in what relations the authorities and subordination were, how they influenced each other. Finally, did the phenomenon of extraterritoriality as the realization of a strong connection between law and state exist in the legal order of the Middle Ages? It is to these issues — the most important for the history of law and the political and institutional history of any period — that a block of articles is devoted to, the authors try to present and substantiate their own hypotheses about the development of European legal consciousness on the basis of a variety of historical materials — from the early barbarian leges to the city statutes of Italy of the late Middle Ages.

The Fortunes of Medieval Towns

In the section “The fortunes of medieval towns” urban settlements are presented in different contexts. In the opening article, a well-known medievalist Wim Blockmans gives a broad overview of the evolution of urban dynamics from the perspective of the Eurasian Middle Ages — from China to Western Europe. The presence of multi-dimensional urban networks made towns ‘growing points’, or, as the author puts it, ‘hotspots’ of medieval society, portraying it differently from the usual image of a static society. Many articles concentrate their attention on particular and not well-known types of towns, such as the towns of the Golden Horde, genetically connected with a specific form of a nomad town; a western town in a foreign environment from confessional and ethnic points (Dubrovnik); smaller and the smallest towns of Normandy, usually known for its local capitals and emporia; the towns of Teutonic Order’s state (Prussia). Special attention is paid to the metropolitan cities of Paris and Madrid, as well as the megalopolis of Florence, the latter being placed under the direct management of Jesus Christ. A special case is presented by Pereslavl-Zalessky, not only as a town of a unique destiny (simply there are no non-unique towns) but also as a present-day developing agglomeration whose identity is based on the creative use of its rich medieval heritage. The section is prepared under the direction of the Commission on history and anthropology of a town of the Division of Historical and Philological Sciences, the Russian Academy of Sciences.

Irina Novichenko
Aachen — the Second Rome: a City as a Symbol of Power in Poetic Carolingian Texts

Maya Petrova
Visible Past: Urban Space in Flemish Book of Hours of Isabella the Catholic

Maria Smagar
Pliska of the 9th Century and Kiev of the 10th Century: the Comparison of Capitals of Krumid’s and Rurikid’s Chiefdoms

Aleksey Schavelev
Borders and Law. Territory in Medieval Law
Law and Its Use Among North Germanic Tribes: Frankish “Periphery” or Independent “Centres”?

Mikhail Zemlyakov
On the Question of the Hierarchy of Legal Orders: Three Examples from Early Carolingian Frisia

Oleg Aurov
Legal Practice in the Southern Leon and Castile of the 12th Century: a Borderline State

Galina Popova
The King and His Kingdom: a Notion of the Tierra in the Second Partida of Alfonso X

Irina Krasnova
To the History of International Law: the Property Rights of the Citizens of Local Centres of Italy in the 14th and 15th Centuries in Foreign Territory

Natalia Sredinskaya
The Immunity of the Cinque Ports: Territorial or Personal Law?

Dmitrii Veber
“Paris is Rome in Our Kingdom”. Political and Symbolic Bases of the Status of the Capital of France

Elena Telmenko
Madrid in the Late 16th Century: Paradoxes of a City that Suddenly Became a Capital