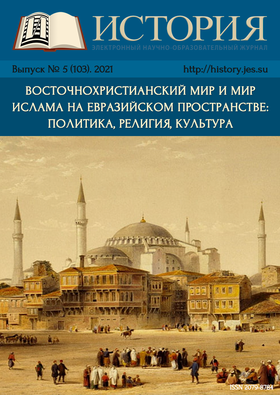 Dmitry Korobeynikov
A Baptized Baskak in Borovsk: Historical Fact and Legend as Perceived by Contemporaries and Descendants

Tatiana Oparina
About “Unsubscribe from Metropolitan Paisiy of Gaza to Boyar Simeon Lukyanovich Streshnev”, which belonged to Patriarch Nikon: Observations and Hypotheses

Nadezhda Chesnokova
A Newfound Icon “Sophia the Wisdom of God with Miracle-Working Icons of the Mother of God” of the Late 17th — Early 18th Century: Aspects of the Iconographic Programme

Elena Saenkova
Codex Vatopedinus gr. 610 and Its Place in the Manuscript Tradition of Kallistos Angelikoudes’ Works

Tatyana Borisova
A View from the East. The Council of Florence (1438—1439) in Russian Historiography and Theology of the 19th and20th Centuries

Adalberto Mainardi
Towards the Arab National Renaissance: the Struggle for the Throne of Antioch in the 2nd Half of the 19th Century and Russia

Lora Gerd
Islam within the Eurasian space
Islam in Kazakhstan: History of Distribution and Modernity

Burkutbay Ayagan / Maral Kaliyeva / Arstan Satanov
“This Doctrine ... Originated from Ismailism, but It Has Moved so Far Away from It that I Positively Consider ‘Panj-Ten’ as a Very Special Religion...”: Materials on Pamir Ismailism Collected by A. A. Cherkasov in 1904

Tatiana Kotyukova
The Vicissitudes of Fate of the Leaders of Ideological Movements in the Muslim World: the Legacy of Abul Ala Mawdudi (1903—1979)

Svetlana Kirillina / Alexandra L. Safronova / Vladimir Orlov
Islamic Traditionalism in the Syrian Provinces of the Ottoman Empire during the Age of Abdulhamid II (1876—1909)

Anna Ardashnikova / Tamara Konyashkina
Islam in the Colonial Policy of France: from the Origins to the Fifth Republic

Dmitry Shmelev
French Council of the Muslim Faith: Hardships of the Integration Mission

Pavel Timofeev
Modern France and the Problem of Religious Radicalism. Evolution of Legislation

Evgeny Osipov
Muslim Migrants in the Eurasian Space: Risks of Adaptation and Predictors of Conflicts