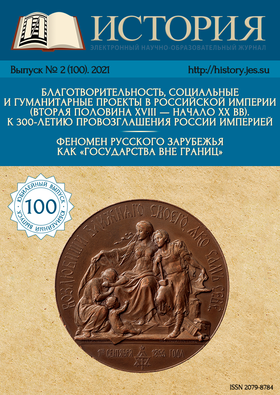 Part I. Charity, Social and Humanitarian Projects in the Russian Empire from the Second Half of the 18th to the Early 20th Century (to the 300th Anniversary of Russia’s Official Proclamation as an Empire) (ed. by Anna Gromova, Anna Volodko)

In the second half of 18th — early 20th century activities in the sphere of charity, social support and humanitarian aid were successfully developing and flourishing in the Russian Empire. Charity activity became one of the ways to solve many social problems of the population. Representatives of the Romanov Imperial family built hospitals, orphanages and poorhouses on their own expense, patronized numerous establishments of mercy, supported various charity campaigns etc. Aid was provided by zemstvo, government agencies, municipal institutions, charity societies, parochial trusteeships, regional welfare boards etc. The Russian Red Cross Society actively rendered humanitarian medical assistance, protected wounded and sick soldiers and civilians both in Russia and during armed conflicts abroad, sending specialized medical missions (ambulances) to the combat zones. Articles presented in this part of the journal’s issue are dealing with various aspects of charity, social and humanitarian activities in the Russian Empire in the aforementioned period. The study of historical experience in the sphere of charity, welfare assistance and humanitarian practices in the Russian Empire, their main forms and directions might be taken into consideration and used by the present-day Russian society.

Part II. The Phenomenon of Russia Abroad as a “State Without Borders” (ed. by Elena Mironova)

The Russian émigré community, in addition to ensuring hundreds of thousands of exiles’ survival, displayed to the world a unique experience of self-organization. Scholars characterize this phenomenon as a “state without borders”, a quasi-state or a “displaced statehood”. The author analyses the process of elaborating fundamental principles for the existence of a community spread across all continents, tries to evaluate its efficiency in the regions far away from the European center, and covers the process of the jurisprudential and legal space formation. A special attention is devoted to the institutions for preserving historical memory. Book publishing, the press, establishment of libraries, printed materials circulation, as well as the organization of Russian Culture Days and programs of musical education for children played a great role in the preservation of each exile’s self-identification as a Russian; it also bounded together and supported the community as a unified whole. The study of the Russian Abroad history is extended beyond the traditional research boundaries, — the interwar period — covering the 1950s.

Issue publications 2 (100)
Author(s)
Charity, Social and Humanitarian Projects in the Russian Empire from the Second Half of the 18th to the Early 20th Century (to the 300th Anniversary of Russia’s Official Proclamation as an Empire)
Philanthropy in Russia in the First Half of the 19th Century: Legislation and Statistics Research Results and Perspectives

Anna Gromova
The Main Areas of Charitable Activities of Prince P. G. Oldenburgsky and Members of His Family

Andrey Matkin
“I Was Very Pleased with the Sympathetic Reception of Our Native Art ...”. The Tenishevs and the Popularization of Russian Culture Abroad

Ekaterina Efimushkina
Elusive Female Subjectivity in the Russian Empire in the Second Half of the 19th — early 20th Centuries: Socio-Medical Practices of Women's Religious Communities

Nadezhda Belyakova / Natalia Shock
Parish Experiences. Social Activity of Parish Priests, Parish Charity and the Question of the Revival of the Orthodox Parish in Russia in the Second Half of the 19th Century

Olga Sokolovskaya
“Helping Serbs”: Contribution to the Study of the Activity of the Moscow Slavic Benevolent Committee in 1850—1870s

Anna Volodko
The Phenomenon of Russia Abroad as a “State Without Borders”
Council of Ambassadors of the Russia Abroad. Role in the Organization and Activities of the “State Beyond Borders”

Marina Moseykina
Russian Emigration in China: Attempts and Problems of Unification in the 1920—1940s

Elena Nazemtseva
Preserving the “Russian cause” in Manchuria: Emigrants and the CER

Maria Krotova
An Attempt to Save or Transform Phenomenon of Russian Abroad? The Institutes and Public Organizations of Russian Diaspora during the First Period of the Cold War