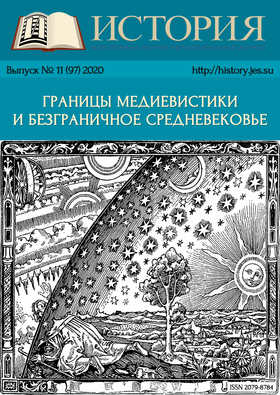 Medieval studies is the branch of historical knowledge studying the medieval period. As with any simple truth, this pronouncement is not so evident as it seems. Who should be considered a medievalist – someone who studies only the medieval Latin West or also historians of broader research interests? What is the Middle Ages? Is it just a specific chronological period or it also means the presence of some essential/characteristic features? In both cases, it is essential to define the limits of the term’s application. Is it possible to speak about the Middle Ages concerning those regions that did not have the Antiquity or the Renaissance and used their own systems of chronology? Would it be outrageous coercion to use purely European chronological frame for other regions? From the point of view of the ideology of this issue, the expansion of the boundaries of medieval studies is not only acceptable but even necessary. Even if to better understand the specificity of the medieval West as the epoch where the roots of the notorious Western take-off, otherwise known as ‘European miracle’.

The widening of territorial and chronological boundaries mentioned in the first article of this issue allows us to examine significant problems of the medieval studies from different, at times, unexpected, perspectives.

The particular emphasis is made on the phenomenon of a medieval town, more precisely, the issues of the functioning of urban self-governing communities (section “Towns and communities in the Middle Ages”). Insufficiently known is the problem of the functioning of urban associations, both on local and interregional levels. The Latin West is not the only possible object of interest for a medievalist. Sufficiently instructive is the research on the history of political and legal thought and international relations of other regions during the later 14th – 17th centuries (the Far East, the Balkans, Muslim empires of the early modern time).

The early modern period of the European material is researched in the context of the functioning of specific institutions (the sale of royal offices) and new communication systems (periodical press, single flyers, theatrical forms).

An unexpected topic for the medieval studies, related to the medievalism, is the experience of medieval spatial heritage by the inhabitants of present-day towns from the Atlantic to the Pacific.

The statement of limitless Middle Ages is supported by the content of section “Identifying systems in society: recent research and practice”. The visualisation schemes in the definition of status and personal characteristics of a person were developed during the Middle Ages, but those principles can be traced not only in the medieval but in the 20th-century material, be it the civil war in Russia, heraldry of the Portuguese army at the end of the 20th century, or political caricatures using medieval imagery.

Pavel Uvarov / Vladimir Védyushkin
Towns and Communities in the Middle Ages
In the Shadow of the Capitals: Frontier Castle Boroughs of the Al-Andalus

Oksana Savelier
Urban Communities of the 14th — 15th Centuries: the Bonds of Self-Organization and Conflicts

Irina Krasnova
Interregional Cooperation: Ideals and Reality
Personal Interest or Common Good? Power Structures of England, Hainaut and Brabant in Struggle for the Possessions of Jacoba of Bavaria

Anna Mayzlish
Venice and Ferrara in the XIV—XV Centuries. Based on the Materials of the Doge's Epistles (Lettere Ducali) from the Collection of Nikolay Likhachev

Evgeniya Sakharova
The Nature of an Urban Association: the Cinque Ports and the Hanse

Arina Lazareva
Patriarch Abraham in the Urban Space of the Early Modern Times: Iconography and Scene

Zinaida Lurie
Roland Mousnier, His book on the Sale of Offices in France, and the Soviet Response (A Review by Boris Porshnev and a Monograph by Alexandra Lyublinskaya)

Natalia Altukhova
A Medieval Town in the 21st Century: Real and Imaginary Heritage
Lessons from Alcobaça (Portugal): Ideals and Realities from a 12th-century Cistercian Plan into a 21st-century Town

Nikolay Kradin
Identifying Systems in Society: Recent Research and Practice
The Evolving Image of the Patron-Goddess on the Coins of Cyrene

Alexander Tchernik
Coats of Arms and Titles on the Seals of Eufemia, the Wife of Albrecht II of Meklenburg, and Its Relatives

Irina Redkova
Black Monks Сontra Black Robes: the Origin of Animosity between the Dominican and the Jesuit Orders in China (16th — 18th Centuries)

Dinara V. Dubrovskaya
Russian Historical and Сultural Heritage on the Aleutian Islands in the Context of the History of Russian America

Alexander Petrov
The First Moroccan Crisis, the Algeciras Conference of 1906 and Its Geopolitical Effects