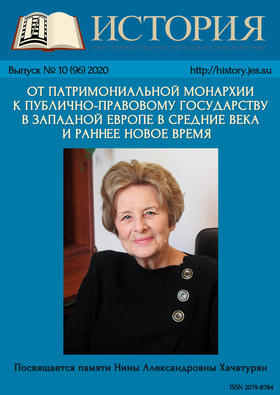 From the Patrimonial Monarchy to the Public / Legal State in Western Europe in the Middle Ages and the Early Modern Age
Editors: Nina Khachaturyan
1000 RUB / 10.0 SU

“From the patrimonial monarchy to the public state in Western Europe in the Middle Ages and the Early Modern Age” is a collective work based on the results of the conference organized on February 1—2, 2019 by the research group “Power and Society” (head researcher: N. A. Khachaturyan) of the Department of History of the Middle Ages (Lomonosov Moscow State University) in cooperation with the Department of Medieval and Early Modern Studies of the Institute of World History, Russian Academy of Sciences.

The conference continued the earlier work of the “Power and Society” research group. Founded in 1992 in the time of welcoming new approaches and concepts to the Russian and post-Soviet historical studies the group has published seven monographs in “Nauka” [Science] and “Aletheia”, along with numerous articles in academic journals including “ISTORIYA” “Property in the Middle Age in Western Europe (Land, Authority, Law)”. In June 2020 the new monograph “The phenomenon of property in the social structure of the Western European Middle Ages” (ed. by Nina Khachaturyan. Saint Petersburg, 2020. Proceedings of the Faculty of History of Moscow State University. Issue 162. Series II: Historical Research) was published by the “Aletheia” publishing house.

The current issue reflects a noticeable innovation in the experimental and theoretical area of medieval studies, in particular, thanks to the new approaches in political history. The latter was once a very traditional and well-researched sphere of historical consciousness (identity) and historical knowledge. New angles and horizons signifying a much more in-depth attitude include the following important achievements that had been gradually added over time:

This does not mean that the issues of the organizational history of political institutes had not been researched before. They were the objects of special interest in historical knowledge of the 19th century emphasizing the history of political institutions. Among issues addressed were the number of officials, positions, and the departmental structure of the institution; however the social context was ignored. In the 20th century, the prosopographic (biographical) studies, in which the data on the number and the size of governmental departments were supplemented by the picture of the social origin or the social affiliation of employees, became a landmark in institutional analysis. This innovation brought the studies of political history into the area of the social structure and the social mobility of medieval society. The new turn in the institutional history at the end of the 20th century (1980s) is in fact owed to the Western European medieval studies (see articles by N. A. Khachaturian, S. E. Fedorov). Its distinct academic novelty is conveyed by the formula for the development of medieval statehood presented in the title of the publication.

Highlighting the issue of institutional maturity of the medieval state (this, according to P. Bourdieu, is a “form of legitimate violence”), the authors of the project stressed the importance of a comprehensive approach when studying it as a whole, dwelling on the medieval character of this highest institutional form of organization – the public state Etat Moderne — its medieval essence treating it as a direct precursor of the Modern Age states.

In this publication we research the issue of institutional maturity of the medieval state in the context of the potential of the social structure. Its most iconic markers are:

The history of the institution of authoritarian power in the Middle Ages reflected the peculiar coincidence of factors in the specific features of the development of its representatives in the secular and spiritual spheres of life. Specifically, this was the case in the tendencies of the institutionalization of power of sovereigns and the heads of the Roman Church. Incidentally, as in the case of the clergy becoming more active in the public sphere as part of the Cathedral movement). Innovations in the process of the secular statehood becoming institutionalized make it possible to identify the components of forming a bureaucracy, along with the obvious signs (in retrospect) of the sad prospect the authoritarian regime entailed while attempting to employ representative institutions. These aspects predetermined the structure of the publication.

Stanislav Mereminskiy
Pseudo-Emperor and the Social Groups of the Late 13th Century Germany: Grounds of Alliance

Anna Gershtein
“The Pragmatic Sanction of Saint Louis”: a Forged Document at the Service of the French Monarchy

Olga Togoeva
Bureaucratic Field of Power of the Papal Curia of the Avignon Period: the Cardinal College

Valeriy Sanzharov
The Officials of the Habsburg Imperial Chancery: on the History of the German Officialdom in the 16th Century

Feliks Levin
Empire and the Crisis of 1618. The Inevitability of Disaster?

Tatyana Gusarova
Innovations in Political and Institutional Life of City-States and Principalities
From the Republic to the Principate: the Stages of Political Development of Italian Cities in the 13th — 15th Centuries

Nina Devyataykina
The Civic Values of French Lawyers, or What Is the State for?

Ekaterina Terentieva
Images of History and History in Images
Mikhail of Tver versus Michael of Chernigov: Images of Saints in Regional Policy of Memory

Daniil Anikin
Representation of the Image of the Russian-Japanese War on the Soviet Movie Screen and Theater Stage, 1940s — 1950s

Alexander Ischenko
“Iron Sailor”: Captain James Cook on the Background of the Era

Dmitriy Kopelev
The Napoleonic Era in the Publications of French Propagandists of Colonial Expansion in the Late 19th — Early 20th Centuries: the Memory of the Past in the Context of Imperial Propaganda

Gregory Siplivii
“Our Great and Good Ally”: the Image of France in the American Revolution