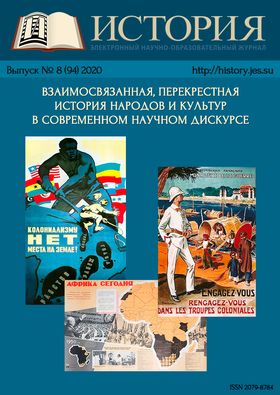 This issue of the “ISTORIYA” includes large thematic blocks devoted to significant themes in the current academic agenda, including African Studies and European Orientalism.

The issue opens with a block of articles prepared following the conference organized by the Centre for African Studies of the Institute of World History (Russian Academy of Sciences) on April 17—18, 2019 (“Studying the History of Africa: People, Issues, Sources”). The conference was dedicated to the 90th anniversary of the first programme of studies in the history of Africa in our country. As its title implies, the programme assumed covered the widest range of problems of African historical studies, including historiography and history of the Dark Continent, source studies of African history, and Russian-African relations.

An important place in this issue is given to the history of African Studies in Russia, their origins in the pre-revolutionary era (A. B. Davidson, G. V. Tsypkin), development in the 1920s — 1930s (I. I. Filatova), personalities, including little-known (E. N. Grak, A. V. Antoshin) and undeservedly forgotten ones (I. P. Yastrebova, Y. S. Skubko), sources on the modern history of Africa (T. M. Gavristova and co-authors).

A number of articles are focused to the development of Soviet-African relations and reflect a new level of research on this issue. Free from “conjunctural layers”, they are based on archival documents that have become available to researchers only in the most recent years. Their authors analyse the history of relations between the USSR and different African countries (Somalia, L. V. Ivanova), some very sensitive moments of these relations (the civil war in Nigeria, S. V. Mazov; the liberation war in Angola under the Portuguese rule, A. V. Voevodsky), and even lessons that can be learned from the history of our country's relations with individual countries and regions of the Dark Continent (East Africa in the 1960s, A. S. Balezin).

Separate articles are devoted to the works of African writers (Ingrid Yonker of South Africa, M. S. Kurbak), history textbooks (Rwanda, I. V. Krivushin), problems of tourism development (the tourism sector of Morocco, M. A. Volodina, A. V. Kuznetsov), analysis of complex events that occurred in Africa in recent years (the civil war of 2002—2011, A. Yu. Shipilov).

The issue includes a block of articles devoted to the problems of European and Russian Orientalism. The topic does not lose its relevance and continues to cause lively discussions in the academic community. The block of articles presented in the issue is formed based on the results of discussions held during a thematic round table held at the Institute of World history of the Russian Academy of Sciences. The articles cover various aspects of the issues related to the concepts and practices of European Orientalism: the influence of school textbooks on the formation of ideas of superiority within the French colonial culture (V. S. Mirzekhanov), the study of the ‘sleeping beauty’ metaphor within the imperial culture of Russia in the late 19 — early 20th century (E. E. Savitskiy), the study of racial perceptions and prejudices of the British after World War II based on cinematic materials (M. S. Zvonareva). A number of articles are devoted to imperial and colonial practices in various countries and regions of the world. Among them are articles on the policy of Austria during the Crimean War (E. V. Kotova), on German colonial policy at the end of the 19th century (A. G. Matveeva), on the features of colonial administration in the overseas possessions of the Netherlands (G. A. Shatokhina-Mordvintseva). Individual articles explore personal experience and its impact on imperial policies and practices: Prince Albert's trip to the Congo and the transformation of Belgium's colonial policy (A. O. Khorosheva), I. Korostovets's experience as a Russian envoy to Iran and his perception of the realities of Iranian life and society (A. B. Larin).

The issue closes with several articles devoted to a wide range of issues: from the legal regulation of various aspects of social life in the USSR to the study of the history of Russian communism as a secular religion.

Issue publications 8 (94)
Author(s)
African Studies and Africanists: History and Modernity
Accumulation of Knowledge about Africa in Russia — How It Started

Irina Filatova
Peace to Your Home (Tribute to Irina Yastrebova)

Yury Skubko
At the Origin of African Studies in Ural: Valentina Grak and Her Role in Deepening and Spreading Knowledge about Africa in Sverdlovsk, 1960s — 1980s

Antoshin Alexey
On the Right Side of History: the Trajectory of “Domestic” African Studies from Endre Sik to the Present Day

Alexander Balezin
“Revolution is not a Mechanical Process”: on the History of Relations between the USSR and the Angolan Anti-Colonial Movements in 1963—1964 (Publication of Documents from the Russian State Archive of Contemporary History)

Alexander Voevodskiy
Soviet-Nigerian Relations on the Eve of and at the Beginning of the Civil War in Nigeria, 1966—1967 (Based on Russian Archival Sources)

Marie Volodina / Alexey Kuznetsov
Orientalism in Europe and Russia: Concepts and Practices of Imperial Politics
The Role of Pedagogy and School Textbooks in Shaping the Idea of Superiority in French Colonial Culture

Aleksandra Khorosheva
Guards Hussar and Sleeping Beauty: to the History of a Colonial Metaphor in Russia around 1900

Evgeny Savitsky
Ivan Korostovets at the Service in Iran: the Country and People in the Perception of the Russian Diplomat

Paola Cioni
The Legal Status of Russian Emigrants in the United States, 1917—1939

Olga Barkova
Legislation of the USSR and the RSFSR on Natural Resources and Nature Protection in 1941—1953: Main Features