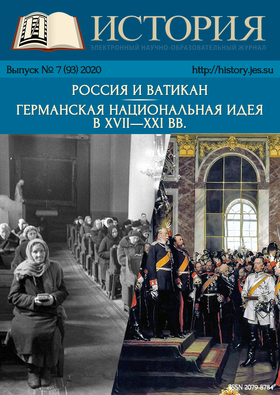 Part I. Russia and the Vatican. Catholics in the Soviet Union: Testimonies of Ordinary People about the Radical Transformations of the 1920s — 1950s (ed. by Evgeniya Tokareva, Aleksey Beglov, Nadezhda Belyakova)

Issue publications 7 (93)
Author(s)
Russia and the Vatican. Catholics in the Soviet Union in the 1920s — 1950s
“Entangled History” and the Religious Quotidian in the USSR

Tatyana Nedzeluk
“They Have No One to Trust”: Сatholics in the Memoirs of a Soviet Political Prisoner (around O. V. Volkov’s Autobiographical Narrative “Sink into Darkness”)

Liudmila Alieva / Artem Verle
The Role of Catholicism in the Preserving of Ethnic Identity of Deported Poles: Case Study Kazakhstan

Yuliya Shapoval
Changes in the Life of Catholics in the Asian Part of the Russian Empire in the 1920s through the Eyes of Their Priests: the Correspondence of J. Vilkas, T. Pashkevichius, J. Senvaitis

Anna Vishivanyuk / Evgenia Tokareva
Letters, Complaints, Appeals of Catholics as a Source of Religious Everyday Life in the BSSR in the Post-War Period

Edmund Yarmusik
A Sensitive Soul Suffers, Not Knowing What to Do to Remain Just Both Before God and Before the Law of the State”: Religious Freedom in the Letter of the Diocesan Leadership of the Catholic Church in Soviet Lithuania

Nadezhda Belyakova
The Victimization of Catholic Poles in the Western Ukraine: Factors, Forms and Consequences (1939 — the End of 1950)

Dmitriy Panto
Catholicism on Sakhalin in the 1920s – 1940s: between War and Peace

Natalya Potapova
Catholics of Rostov-on-Don in 1944—1952: Unequal Struggle for Existence and Its Outcome

Vasiliy Dudarev
Chancellor H. H. von Hohenlohe-Schillingfürst Inner Policy: Some Aspects of Shift from the “New Course” to the “World Policy” (based on Foreign Policy Archive of the Russian Empire Documents)

Anna Matveeva
The Pan-German Version of Imperial Expansion at the End of the 19th – First Quarter of the 20th Centuries: the “National Question” and “Living Space” as Factors in the Creation of the German World

Alexander Turygin
Development of the German National Idea in 1908—1909

Alexander Yurin
Varia
The Island that Had not Submitted to the Enemy: Malta’s Heroic Defence During World War II