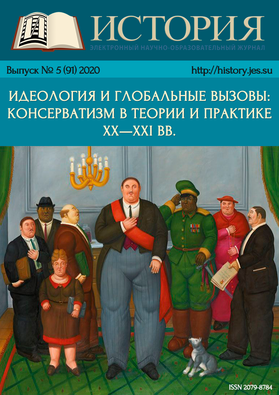 This issue is dedicated to ideology and political practices of conservatism, involving an analysis of various national realities and historical epochs from the middle 19th to the early 20th century. From the ideological and political point of view, conservatism is not solid and homogeneous, though it has features peculiar to right-wing, counterrevolutionary, and traditionalist movements. During its evolution, conservatism as a political and social doctrine had several movements formed within it — movements having little in common and sometimes opposite in intentions, yet related: Catholic socialism, corporatism, fascism, right-wing authoritarianism. This issue contains research articles offering an analysis of this phenomenon on the example of European, Asian, and American countries, which allows the reader to get acquainted with various national manifestations of conservatism, outwardly dissimilar, though united by common ideological roots. For a century and a half, liberalism, socialism, and conservatism in various forms have been determining the political and social struggle in most countries of the world. They are inseparable from each other, and, as Immanuel Wallerstein put it, the interaction between them “more fundamentally reflected the constant reconstruction of political alliances” and determined the formation of modern political reality in the global world. Conservative ideas are, to some extent, present in many social and political movements that are not even related to conservatism by their origins. The current issue focuses on the study of this phenomenon.

Issue publications 5 (91)
Author(s)
Ideology and Global Challenges: Conservatism in the Theory and Practice of the 20th — 21st Centuries
The Evolution of the Strategy and Tactics of the Colombian Conservative Party (1849—2020)

Egor Sartakov
The German Army in 1918/1919: from Failed Neutrality to the Practice of Radical Conservatism

Konstantin Sofronov
The Failed “Right-Wing March” of the Parliamentary Parties: Bulgaria and Romania in the Inter-War Period

Anna Volodko
“Politics as a Continuation of the War by Other Means”. Violence as the Main Drive of the Birth of the Franco State. Rearguard and Battle Front, 1936—1939

Francisco Leira-Castineira
Franco's Shadow. Notes on Fascist Violence During Late Francoism and the Transition in Asturias

Aleksander Kozhanovsky
The Evolution of American Conservatism: from Federalists to Trump. Past and Present

Pavel Koshkin
Discourse of a Conservative Ideology in the Globalized World

Larisa Dodkhudoeva
Turkic and Persian Manuscripts and Documents in the Collection of Nikolay Veselovsky at the Russian State Archive of Literature and Art (Moscow): a Brief Overview

Tatiana Kotyukova
“In a Stubborn Struggle for the Marxist History of Material Culture...”: the Documents of the Postgraduate Student of SAHMC Alkey Margulanov from the Archival Collection of the IHMC RAS

Valentin Smirnov
Specialists in Kazakh Сulture of the Petersburg’s Kunstkamera: Vadim Petrovich Kurylev (1928—2008) and His Museum and Scientific Heritage