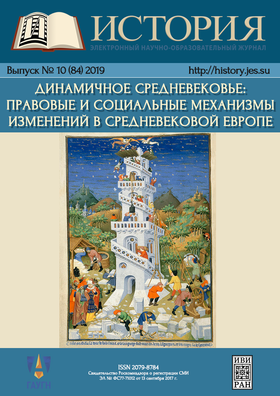 The researchers have long stopped considering the medieval society “stagnant” or halted in its development. On the contrary, the changes that took place in West European society during the medieval and early modern periods prevent us from characterising it as a “traditional society”. But the nature of the dynamics that the West assumed during the Middle Ages remains unstudied yet.

The articles of the issue “Dynamic Middle Ages” are trying to answer this question, each in its own way. They discuss the peculiarities of information transmission between different regions, countries, and institutions; features of a personal choice of an individual in a difficult situation that calls for decisions hardly within the existing norms; interaction of cultural traditions which combination could produce an unexpected effect. Often an individual or collective choice that seemed to be dictated by momentary circumstances could lead to far-reaching consequences that consolidated the change of the norm and sometimes changed the trajectory of the society’s development.

The section “Outside of Own Territory: Reflection of Law in Non-Legal Texts” contains articles prepared on the basis of reports presented at the conference of the series “Law in the Medieval World” in autumn 2018.

The authors focus on the features of the description (understanding) in medieval non-legal texts of such elements of the legal system as the protection of justice, lawmaking, litigation, ensuring rights, formalizing a legal act, as well as the symbolism of legal norms. Researchers try to analyze whether they were recognized as parts of something in common or existed in different areas of “social representations”, and how “individual” or, on the contrary, “collective” were these ideas? Several articles also deal with knowledge of legal norms in those periods when their fixation was very limited and unsystematic. The relationship of legal sources of a certain period and region, we most often find, studying the extralegal issues.

As studies in this section show, the description of situations related to law system in non-legal texts allows you to get closer to understanding the social role of law in medieval society, and also expand the range of sources for studying the history of law.

Issue publications 10 (84)
Author(s)
Dynamic Middle Ages
Offices in the Reflection of the Legislative Acts of Henry II (1574—1589): All for Sale?

Sergey Kondratiev
Why Did the Canons of Lyons Grant Florentine Nuns a Hand of St Just?

Marina Korolyova
In the Area of Turbulence: Luxembourg and Rights for Its Rule in the 14th — middle of the 15th Centuries

Irina Mastyayeva
Illegitimate Сhildren and Their Parents in the Notary’s Office: Conflicts and Transactions Based on 16th Century Parisian Notarial Acts

Vasilina Sidorova
From Gifts for Salvation of the Soul to the Secular Charity: Gifts on the Wills of the Royal Officers to Paris and Parisians

Tatiana Kushch
Outside of Own Territory: Reflection of Law in Non-Legal Texts
The Bible and the Medieval Tradition of Law

Igor Filippov
Gregory the Great as Judge. Juridical Cases in His “Sardinian Letters”

Elena Marey
The Exemplar Pactionis of the Kings Gunthram and Childebert II in the History of the Franks of Gregory of Tours: the “Oldest Treaty of France” or the “Annual Record”?

Andrey Vinogradov / Mikhail Zheltov
The King and the Law: Information of Royal Lawmaking in the Castilian Chronicles of the 12th — Beginning of the 13th Century

Irina Krasnova
A Land Without Laws: a Legende of Independence of Castile According to ms. 431 of the National Library (Madrid) and Its Interpretation

Olga Togoeva
The Law and the Lady: English Judicial Practice in the “Life of Lady Falkland”

Veronika Sharova
Scholarly Life
“Guicciardini and Machiavelli at the Origins of Modern Historical Science of the Modern Time”: Notes on the Margins of an International Conference

Mark Yusim
International Scientific Conference “The Challenge of Time: the Rise of the Centralised States in Eastern and Western Europe in the Late 15th — 17th Centuries”, Kaluga, October 8—11, 2019