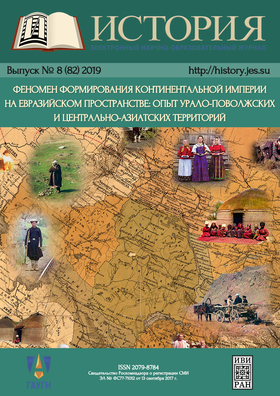 Phenomenon of Formation of the Continental Empire in the Eurasian Area: the Experience of Ural-Volga and Central Asian Territories
Editors: Sergey Lyubichankovskiy
1000 RUB / 10.0 SU

The phenomenon of the Empire is of lasting interest to historical science, since it constantly manifests itself in different concrete historical conditions and eras. This interest fully applies to the history of Russia, especially today, when there is a clearly expressed demand for a balanced approach to our common past in the context of the Eurasian integration process. The focus of this thematic issue is the phenomenon of the formation of a continental empire in the Eurasian area through the prism of the experience of the Ural-Volga and Central Asian territories. The scale of this task is determined by the need to study a large number of archival sources from the archives of Russia (both federal and many regional) and the CIS countries from a modern methodological point of view, the need to conduct a comparative historical analysis of the source material of the vast Eurasian macro-region of nomadic and semi-nomadic peoples during the centuries-long evolution of state development of the Central Asian and Ural-Volga territories of the Russian Empire, and, finally, the need to compare different perspectives on the same historical processes taking place on the territory chosen for the study. It is important that the study of this issue literally forces us to turn to the extremely debatable problem of colonialism with respect to Russian material and focus on alternative models for interpreting the phenomenon of the formation of a continental empire in Eurasia.

The authoring team of this thematic issue is made up of well-known experts from large scientific centers of Russia (Barnaul, Kazan, Moscow, Nizhny Novgorod, Omsk, Orenburg, St. Petersburg, Samara, Simferopol, Ufa, Chelyabinsk, Elista, etc.), Kazakhstan (Astana, Almaty, Kostanay, Aktyubinsk), as well as Austria and the USA. Structurally, the issue is divided into several sections: conceptual theoretical material on the problem of acculturation is presented in the section “Acculturation and Colonialism: pro et contra”; articles oriented to the consideration of certain important sides of the development of the continental empire are combined in the sections “Ethnos and subethnos as an object and a subject of the imperial territory”, “Regional models of integration into the Empire”, “Empire Regional Elites”, “Economy as a factor in the development of the Empire”, “Religious mechanisms of the Empire”, “Acculturation by means of education”. Of course, this division is largely arbitrary and only allows us to understand the main focus of the content of a particular article, however, in this case, almost every article is a comprehensive author’s vision of the problems.

The release of the issue is timed to a significant date — (October 22), on November 2, 1721, Peter the Great adopted the title of All-Russian Emperor, and Russia became officially called Russian Empire.

Issue publications 8 (82)
Author(s)
Acculturation and Colonialism: pro et contra
Accultural Model of an Empire as a Methodological Alternative to the Colonial Approach

Bulat Aznabaev
Kalmyks within the Tsardom of Russia and Russian Empire

Alexey Kortunov / Vladimir Ivanov
The Annexation of Central Asia to Russia: the Peculiarities of the Military Marching Routine of the Cossacks in the Khiva Campaign in 1873

Svetlana Brezhneva
Regional Models of Integration into the Empire
The Phenomenon of the Formation of Imperial Identity: the Modern Historiography of the Problem

Gulbanu Izbasarova
Nogays of the Northern Azov and Kalmyks of the Volga Region: a Comparative Analysis of the Imperial Policy of Acculturation In the System of Management and Economic Activity

Vladislav Dmitriev
Legal Institutional Framework of the Steppe Region during the Post-Reform Period: the History of Local Traditions, General Imperial Institutions and Legal Standards Engaging Together

Dmitry Vasilyev
“Our Border With Persia Along the Atrek River… in Fact Remains Airy”: Russian-Iranian Borderland Issues to the East of the Caspian Sea in the late 19th – early 20th Centuries

Yulia Lysenko
The Dialogue of Authorities in the Administrative Space of the Russian Empire in the First Half of the 19th Century (for Example, Most Loyal Orenburg Governors Reports)

Alexandr Senyavsky
Formation of Regional Economic Space in the South-East of European Russia: Results and Prospects for Studying

Gulmira Sultangalieva / Almagul Kairalapina
Economic Instruments of Advance of the Russian Empire in the Central Asia: Fixation the Rate of Exchange of Tan’ga in Bukhara and Khiva

Vera Budanova / Larisa Selivanova
Presentation and Discussion of the Project “Entangled Histories: Russia and the Vatican, 1917—1958”