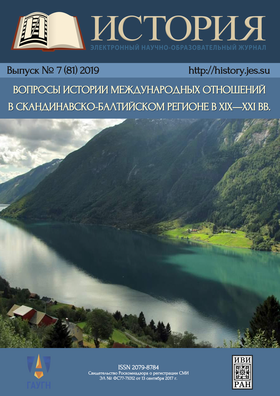 This number is dedicated to the problems of Scandinavian and Baltic history and touches upon issues of international relations, political, economic and cultural interaction of Russia, Northern Europe and the Baltics in the 19th — 21st centuries.

The team of contributors brought together experts from Russia, Germany, Latvia, Lithuania and Estonia. The materials of the issue are arranged in chronological order, however, one can also note certain problem blocks that allow more fully illuminate different aspects of political and economic relations in the Baltic Sea region.

A number of articles devoted to the turbulent events of the first quarter of the 20th century takes on particular significance. In the year of 2018 the Baltic states celebrated the 100th anniversary of independence. The background and the formation of Baltic statehood, the processes of searching for national identity and state building, as well as the relationships of young small countries with great powers are considered by Tatiana Kuznetsova (Internal Prerequisites of the foundation of the Latvian Republic: Latvian perception of Russian at the turn of the 19th — 20th centuries), Rimantas Miknis (Lithuania and Russia in 1918—1924 in the eyes of a by-stander. The reflections of Mykolas Römeris), Cheslovas Laurinavicius (To continue the topic of the Lithuanian state in the context of the Anglo-Russian axis. Plots of 1919—1920), Aleksander Shubin (Shadow of the Grand Duchy of Lithuania: National-State Construction in Lithuania and Belarus in 1919—1920).

The issues of cultural and scientific contacts between Russia and Lithuania, support and ideological “education” of youth — representatives of the Latvian Diaspora in the USSR, Soviet diplomacy in Latvia in the interwar period are investigated in the articles of Evgenia Nazarova (The experience of the Russian scholar for the development of the public education in Lithuania in 1917—1926), Dmitriy Avetyan (Soviet Latvian Periodicals for Youth. 1920s — 1930s), Yuliya Mikhailova (Military coup of January 21, 1927 in Valmiera in the reports of Soviet diplomats).

A special block is devoted to Russian-Norwegian relations in the 19th — 20th centuries. The authors touch upon the following problems: the process of transformation of the main vectors of Russian-Norwegian relations in the 19th and early 20th centuries (based on the monograph «Сближение: Россия и Норвегия в 1814—1917 гг.», М.: Весь мир, 2017, Lyudmila Sadova), the multiplicity of perception and the formation of various lifestyles and activities of F. Nansen in Russia (Andrey Repnevsky), the role of the Norwegian entrepreneur J. Lied in the organization of the “Siberian Joint-Stock Company of Shipping, Industry and Trade”, its successes and failures (Vladimir Karelin), Soviet politics in the Far North in the context of relations with Norway (Alexey Komarov), Soviet-Norwegian relations during the Cold War (Aleksander Porzel and Oksana Zaretskaya).

A number of articles are devoted to post-war world order and international relations in the region during the Cold War. Sergey Verigin and German Chumakov analyze the evolution of Soviet-Finnish relations during the Cold War. An article by Tatiana Androsova is devoted to the economic aspect of Soviet-Finnish relations in the post-war period, in particular, the payment of reparations. The formation of the Baltic diasporas abroad after the end of the Second World War is considered by Kristina Bekere (Latvians in South America in 1945—1991 and their national political activities) and Magnus Ilmjärv, who analyzes the attitude of Baltic politicians in exile and emigrant communities in the West and in US on the participation of Estonians, Latvians and Lithuanians in war crimes, crimes against humanity and the Holocaust during the German occupation of the Baltic states during the Second World War. The author focuses on the example of Estonian émigré communities and examines several major cases related to the accusation of Estonians of collaborationism in the 1960s and 1980s.

German historian Jan-Hinnerk Antons analyzes the problems of cultural and public diplomacy in the region using as an example the so called Baltic Sea Week. The issue is completed by the contribution of Vladimir Olenchenko, who studies contemporary aspects of political and economic relations between Russia and the countries of Northern Europe and the Baltic States from the regional integration point of view.

Issue publications 7 (81)
Author(s)
International Relations in Scandinavian-Baltic Region in the 19th — 21st Centuries
Estonians and the Caucasus: from Terra Incognita to Terra Promissa. Based on the Materials of the Estonian Press at the Turn of the 19th — 20th Centuries

Andrey Repnevsky
Internal Prerequisites of the Foundation of the Latvian Republic: Latvian Perception of Russian at the Turn of 19th — 20th Centuries

Svyatoslav Gritsenko
Jonas Lied’s Siberian Company: Achievements and Failures of Norwegian Business in Russia at the Beginning of the 20th Century

Lyudmila Sadova
Lithuania and Russia in 1918—1924 in the Eyes of a By-Stander: the Reflections of Mykolas Römeris

Evgenia Nazarova
To Continue the Topic of the Lithuanian State in the Context of the Anglo-Russian Axis. Plots of 1919—1920

Cheslovas Laurinavichus
Shadow of the Grand Duchy of Lithuania: Nation-Building in the Territory of Lithuania and Belarus in 1919—1920

Dmitriy Avetyan
Military Coup of January 21, 1927 in Valmiera In the Reports of Soviet Diplomats

Tatiana Androsova
Soviet-Finnish Relations During the Cold War: a View From Karelia

Sergey Verigin / German Chumakov
Baltic Refugee Politicians, Organizations and Crimes Committed Against Humanity in the Context of the Cold War. The Example of Estonian Émigré Communities

Magnus Ilmjarv
Soviet-Norwegian Contacts on Svalbard During the Cold War

Oksana Zaretskaya
Public Diplomacy and Personal Encounter: the Triangular Relations between East Germany, Scandinavia and the Soviet Union at the Baltic Sea Week (1958—1975)

Evgenia Nazarova
Varia
Stadial Classification of Historical Types of Political Culture, According to the System-Communication Approach

Irina Variash / Rustam Shukurov
Imperial Legacies, Intercultural Connections and the State Symbolism: the Star of the Republic of Indonesia

Anton Zakharov
American Historiography on German Big Business Activities in the Period of the Dawes Plan, 1924—1929

Mikhail Kovalev / Velikhan Mirzekhanov
The Activity of the Council on Religious Cultes and Muslims Religious Boards for the Formation of the Positive Image of the USSR at Foreign Citizens for the Use of the Media, Books, Albums and Cinema in 1953—1965

Vyacheslav Akhmadullin
The Attempt to Reform the CMEA in 1962—1963 in the Assessments of French Diplomats. According to the Materials of the Archive of the French Ministry of Foreign Affairs