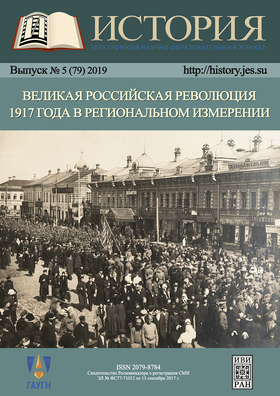 In the contemporary conditions of changing the methodological approaches in historical researches, there are new opportunities for studying the history of the Russian Revolution taking multifactorial character of historical process into account. The centenary of the Revolution gave rise for many scientific events (conferences on different levels, seminars, exhibitions) that makes possible to undertake comparative and interdisciplinary studies of the topic, to unite Russian and foreign experience in studying the nature of the revolutionary process as a whole and its regional manifestations in particular.

The local approach that have united all the studies of the present issue allowed the authors to understand the mechanisms of interference of social-cultural, social-economic and political factors in the revolutionary process, interaction and mutual influence of different power structures, political organizations and society, the level of their influence on the choice and realization of vectors of the revolutionary process that showed themselves at the local level.

The issue contains the research papers are situated in “borderline” research field and cover the common problems in different and wide Empire territories (the materials from Tula, Kaluga, Vladimir, Moscow, Kazan’, Samara, Arkhangelsk and Tyumen governorates, Turkestan and the Crimea are presented): the mechanism of establishing the power institutions at the local level, interrelation of authorities and society (the most active groups of population in the revolutionary process: peasants, workers), the participation of local political organizations and their leaders and the self-government authorities in establishing the new governing institutions. Several papers correlate the policy of the governing institutions in the Center with their realization in the provinces studying the regional policy and the legislative process of local governments and power institutions.

The editors of the issue have not grouped the papers into sections consciously because the material presented in papers is not limited by the interest to the separated aspect that the authors have chosen for the headline and let us see the diversity of the revolutionary process in the borders of the declared theme of the issue.

Photo on the cover: “Freedom celebration”: soldiers of the Tula garrison on the parade april 7, 1917.

liliya Soza
The Student Press in the Russian Province in 1917

Vladislav Iakovenko
The Struggle for Power in the Tula Province in 1917—1918 (how the Bolsheviks Took the Power, and the Mensheviks and SRs “Gave” It)

Natalya Nikitina
Revolution of 1917 and Civil War in Memoirs and Fiction: the General and Special

Ekaterina Barinova
The Land Policy of the “White” Authorities in the European North of Russia and Siberia: the Search for a Common Approach

Vasilii Sablin
The February Revolution of 1917 in Turkestan in Personal Documents of the Turkestan General-Governor A. N. Kuropatkin

Oksana Pugovkina
The Autonomy: of Turkestan or Kokand

Elena Kotova
Women-Medics of Russian Abroad in 1917—1939: Scientific and Practical Work in Emigration

Olga Barkova
The United States and the Rising Nazi Threat, 1933—1938

Vladimir Pechatnov
The Way to Communism: Transport Infrastructure and Post-War Restoration of the USSR Industry (through the Example of the Karelian Isthmus)

Pavel Pokidko / Elena Kochetkova / Ivan Letyukhin
Between Political Conservatism and Economic Liberalism: Carl Friedrich Goerdeler and His Concept of “the Other Germany” after the Overthrow of the Nazi Dictatorship

Sergey Nevski
Murmansk Region in International Relations of the 20th Century: the Regional Level of the Foreign Policy of the USSR/Russia