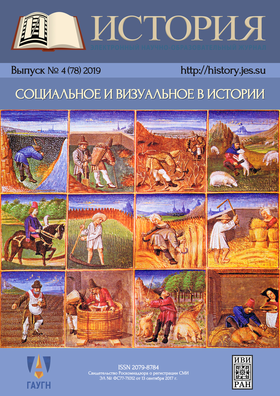 This issue of the journal presents the diversity of issues and research approaches of contemporary social history.

The articles of the issue are devoted to various historical forms of visualization, embodied in their historically determined types: coats of arms, seals, coats of arms, pictorial slogans, coins and so on. Article of А.P. Tchernik considers the example of manifestations of heraldry ignoble in the visual space of a European city in the 15 – 16th centuries. K.A. Elokhin analyzes Spanish royal personal and ancestral badges and their role in political and dynastic propaganda on coins of the 16 century. The problem of heraldic terminology and early forms of blazon is the study of D.S. Staroskolskaya. E.V. Pchelov turned to the Russian noble coat of arms belonging to scientists and other scientists of the 18th – early 20th century. The process of destruction of traditional visual-cultural relations in the urban social and communication culture became the subject of attention Evstafiev D.G. and Tsyganova L.A. D.V. Baiduzh turned to the history of studying the emblems of the German Order. Historical heraldry in its earliest manifestations is the topic of the article by I.A. Popova, who reviewed a series of stamped miniatures of the Codex Manesse of the 14th century. The articles reflect a part of a very wide spectrum of modern research directions in the field of studying historical links of the visual and social.

Issue publications 4 (78)
Author(s)
The Codification of the Custumals of the Cinque Ports: an Attempt at Unification?

Yulia Arnautova
“How We Lived”: Memorial Plaques as Markers of Daily Life Space

Elena Besedina / Tatiana Burkova
“Manufactory for Bread”: Labor Incentives of Textile Workers in the Years of Revolution and Civil War

Marina Vinokurova
The “Generation of Janitors and Watchmen”: Work and Employment Ethics in the Cultural Underground of the Late Soviet Period

Irina Krasnova
The Athenian Piraeus and Its Inhabitants

Valerya Lanskaya
The Ruling Elite and Patronage System in Russia in the 18th Century: an Overview of the English-Language Historiography

Anastasia Lyscova
Features of Productive Cooperative Labour in England in the Middle of the 19th Century: in a Context of Christian Socialist Associations

Irina Novichenko
Visual Studies in the Medieval Field: Flemish Book of Hours of Isabella the Catholic

Maya Petrova / Filipp Petrov
“Our Interest Demanded to Make a Replacement”: Appointments to Diplomatic Posts in the Early Reign of Catherine II

Olga Togoeva
Social Cohesion of German Society at the Beginning of the 21th Century: from Unification to Unity

Tatiana Khrishkevich
“Brotherhood of the Officers”: Parameters of Social Consolidation of Royal Officials in France

Galina Shatokhina-Mordvintseva
The Perfect Man — from Metaanthropology to Homo Socialis

Sharif Shukurov
The Lallemants: Non-Nobles in the Visual Space of a European City of the 15th — 16th Centuries