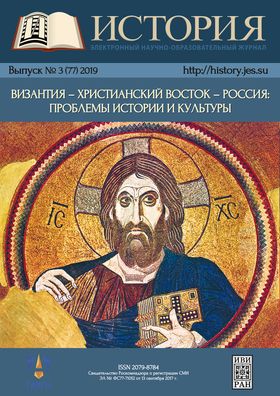 This issue of the journal comprises researches on the social, ecclesiastical, artistic and cultural history of the Eastern European area — Byzantium, the Christian East and Russia — from the 4th to the second half of the 19th century. The issue covers relevant problems of the political, religious and cultural interaction in the region over a long period.

The articles published here have their focus on the interdisciplinary study and the comparative analysis of church history in Russia and other countries of the Christian Orient. They reveal the continuity of confessional and cultural traditions during more than a thousand years, on the one hand, and emphasize the peculiarities of the perception of ancient Christian ideas, customs, and liturgical practices, on the other.

Our authors explore the terminology of Byzantine, Arab, Ottoman, Armenian and Latin sources (the articles by A. B. Vankova, D. A. Korobeinikov); analyze the decisions of the Church councils of 1620 and 1666/67 in Russia (E. V. Belyakova); examine the relations of the Russian Church with the Eastern hierarchs, for example, the departure of Patriarch Nikon from the Moscow Cathedra as viewed by the Greek Metropolitan of Gaza Paisius Ligarides (S. K. Sevastyanova); study the political struggle within the local churches of the Christian East exemplified by the Patriarchate of Alexandria, and the role of Russian diplomacy in these events (O. E. Petrunina).

For the first time a researcher looks from the angle of source study into the professional selection of Greek language translators in the Posolsky Prikaz, shedding new light on the activities of the 17th century Russian Foreign Office (Z. E. Oborneva).

Another group of articles concerns the cultural and artistic history of the post-Byzantine period. It includes studies of artistic monuments fabricated in Russia for eastern hierarchs and their existence in the Christian Orient in the context of the cultural relations and foreign policy of the Muscovite State (the articles by M. A. Makhanko and N. P. Chesnokova). One more theme is tracing the history of the Athonite icons of the Virgin in Russia apprized as a continuation of the Greek tradition; the author points to cases of changing the original names of the Athonite icons and setting exclusively Russian substitutes in their stead (N. I. Komashko).

Two publications are dedicated to new discoveries in the archives of Athos shedding light on the history of Athonite bookishness of the 14th to the 19th centuries. O. A. Rodionov studies the transmission of the Hesychast tradition through the Late Byzantine and Post-Byzantine periods, on the base of the corpus of Callistes Angelikoudes. M. V. Bibikov introduces the latest discovery in the library of the Athonithe Russian Monastery of St. Panteleimon — a Greek compilation of Russian saints’ lives (Antoniy Pecherskiy, Feodosiy Pecherskiy, Mitrofan of Voronezh) and other translations mainly of Slavic origin. L. A. Gerd presents the Russian-French scholarly projects of the second half of the nineteenth century concerning the history of Athos.

All the works published are based on new data discovered in the course of recent research and put into circulation unique archival sources. The articles presented in the journal will certainly be of interest to professional historians, philologists, specialists in cultural studies, undergraduate and graduate students in humanities, as well as a wide range of researchers and readers.

Issue publications 3 (77)
Author(s)
Byzantium — Christian East — Russia: Problems of History and Culture
“Because the Divine Grace Brought Us together”: Saint Basil the Great and Monastic Terminology

Anna Vankova
Konostaulos or Kundistabl? Adventures of the Office of Constable (Connétable) in the Eastern Mediterranean

Dmitry Korobeynikov
Panagia for Patriarch Jeremia II of Constantinople Made in Moscow: One Not Survived Insignia of the Beginning Age of Moscow Patriarchate

Natalia Komashko
The Corpus of Kallistos Angelikoudes’ Writings: a Reconsideration

Mikhail Bibikov
On the Election of the Patriarchs of Alexandria in the 19th Century: the Patriarchal Elections of 1858

Sergey Tsaregorodtsev / Aleksandr Shirinyants
About Date of Death and the Grave of the Kazakh Sultan of Zu’l-Qarnay Ibn Jangir. New Documents of History of the Bukey Khanate

Vyacheslav Akhmadullin
The United States Are Losing an Ally in the Middle East: J. Carter’s Administration Policy towards Iran, 1977—1980

Valery Yungblyud / Tamara Vorobyova
Problem of Development of the Law on Youth in Russia: Analysis of Historical and Legal Experience of the Soviet Union