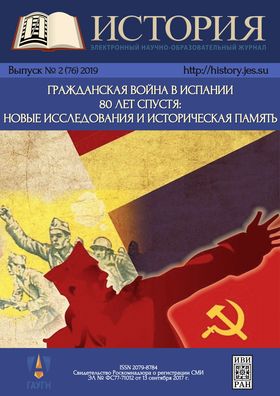 The Spanish Civil War is one of the most significant and tragic events in the history of the 20th century. In 2019, the world celebrates the 80th anniversary of the end of the Spanish conflict, which is often defined as the first battle of the Second World War and the “last battle of the romantics”. Events in Spain do not fit into clear schemes of confrontation for political or economic interests; first of all, it was a battle for ideals on Spanish soil, in which there was no room for concessions and compromises.

The Soviet Union, one of the few who came to the aid of the defenders of the Spanish Republic, held a special place in this battle. Since then, the Spanish theme speaks in a special way in the hearts of our compatriots; it occupies an equally important place in the research of Russian Hispanic historians.

Issues of international relations, Soviet military diplomatic assistance to the Republic, participation of Soviet volunteers and fighters of the Interbrigade, public diplomacy and cultural ties can be singled out among the most relevant issues of interest for researchers of the Spanish events of 1936—1939. Of particular interest are the documentary evidence of the Civil War of 1936—1939, which is stored in the Russian and Spanish archives, as well as the historical memory and problems of the interrelations of modern disputes and the events of 80 years ago.

The materials of this issue were partly prepared on the basis of reports submitted by their authors during the work of the international scientific conference “Soviet-Spanish Relations during the Spanish Civil War of 1936—1939”, organized by the Institute of World History of Russian Academy of Sciences in September 2018.

Articles are grouped into five sections. The first of them is titled “Soviet-Spanish interaction and Russian volunteers in Spain” and is dedicated to a multifaceted system of Russian-Soviet-Spanish intersections and contacts at the state, public and personal levels. Here are articles devoted to various areas of Soviet aid to the Spanish Republic, the formation of the image of the USSR in the republican and Franco press, the social and national composition of Soviet volunteers, the fate of Russian émigrés who participated in the Spanish Civil War on both sides of the front.

A small but significant section of the issue is devoted to national issues in the context of the Spanish Civil War, presented in the Catalan and Andalusian material.

The final section of the issue deals with the problems of historical memory. It consists of articles analyzing the discourses of the opposing sides, the refraction of the topics of the civil war in the Spanish cinema of the Franco era, the projections of the events of the 1930s on the left movement and modern Spanish internal political conflicts, as well as an idea of the Spanish events in the pages of the modern Russian press.

The events of the Civil War in Spain of 1936—1939 were and remain one of the most important topics of historical research and form a significant part of the multifaceted Russian-Spanish dialogue. The compilers of the issue hope that its materials will help in highlighting the previously untouched problems and outline areas for further scientific research by both domestic and foreign researchers.

Georgy Filatov
The Formation of the Image: The USSR in the Republican and the Francoist Press

Anna Volodko
Soviet Citizens in Spain during the Civil War of 1936—1939: Problems of Adaptation and Everyday Life

Dmitry Surzhik / Maxim Sinitsyn
Portugal of Salazar, an Indispensable Ally of Spain of Franco during the Civil War in 1936—1939

Andrey Schelchkov
The Cuban Volunteers in the Spanish Civil War: the Roll Call of Two Revolutions

Dmitry Khazanov
USSR in the Spanish Civil War 1936—1939: New Moments based on the Archives of Foreign Policy of the Russian Ministry of Foreign Affairs

Vera Malay
Negotiations between the C.N.T. and the U.G.T. on the Conclusion of the Pact of Trade Union Unity in 1938 (on the Base of RGASPI Archive Materials)

Dmitry Rublev
Interned Women in the Rieucros Camp (Lozère, France), 1939—1942 in the Documents of the Russian State Archive of Social-Political History

Mikhail Zemlyakov / Olga Okuneva
National Issues
From the Honest Anti-Bolshevism to the not Honest Admiration of the USSR: the October Revolution and Its Aftermath from Nationalist Republicanism Framework in Catalonia

Anna Paisova
Reviews
The New Editions of the “Acta Martyrum”