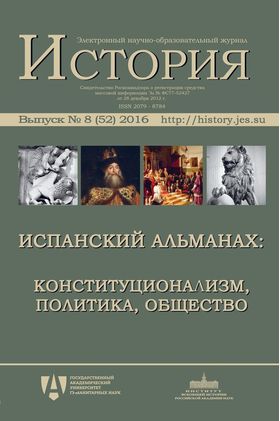 The main part of the issue that you have opened, represents the materials of the round table “Constitutionalism in Europe and America: the Legacy of the Past and Perspectives (200th Anniversary of the Cadiz Constitution of 1812)”, which was held at the Russian State Humanitarian University in the autumn of 2012 on the initiative of Igor Mednikov. As the round anniversary determined, the program included articles about the Cadiz Constitution of 1812 by itself, its role in the Spanish history of the 19th — the beginning of the 21st century and, in this regard, the Constitution of 1978, which has played such a significant role in the Modern history of Spain.

However, the round table and, accordingly, the publication of its materials has two virtues that make this issue of the journal interesting not only for hispanists. Firstly, along with articles on the Cadiz constitution of 1812, its international context, a substantial group of reports is devoted to the constitutions of other countries and regions: Russia, USA, Latin America, Britain, France, Germany and Belgium — and partly to other periods, as chronologically articles cover not only the 19th century, but also the 20th and the beginning of the 21st century. Secondly, another noteworthy feature of the Cadiz Constitution and the related events is reflected in the materials of the round table: its special place in the history of Russia and Russian-Spanish relations. Various aspects of this connection are also investigated in several articles.

In addition to the materials of the round table about constitutionalism, the current, third, issue of “The Spanish Almanac” also contains a collection of articles devoted to the history of Spain in the Middle Ages and Early Modern times. These works are devoted to different regions — Castile and León, the Crown of Aragón, the Emirate of Granada — and affect a wide range of issues, from domestic politics and the history of law to diplomacy and historiography. Some of the articles are related to the history of the embassy of Piotr Potiomkin to Spain in 1667—1668. Its 350th anniversary will be celebrated at the end of 2017 and in the beginning of 2018.

Authors and editors hope that the issue of the journal will be of interest to readers.

Issue publications 8 (52)
Author(s)
Political Constitution of the Spanish Monarchy of 1812: Its Legal Characteristics and Political Significance

Tatyana Alekseeva
Russian Diplomacy During the Epoch of Cadiz Constitution

Olga Volosyuk
The Legacy of 1812 in Spain and Russia

Nataliya Rostislavleva
Constitutionalism in France in the Years of the July Monarchy: the Idea of Liberal-Conservative Synthesis

Natalya Tanjshina
Constitution of Belgium: 150 Years of Stability and State Reforms at the Turn of the Century

Kirill Solovev
The Constitutional Assembly 1993: Impressions of a Participant

Aleksander Shubin
Early Medieval Assemblies in the Kingdom of León: a Problem of Interpretation

Darya Safronova
The Islamic and Crown Law in the Crown of Aragon: the Stages of the Dialogue

Nadezhda Konyushikhina
Conductors of Ambassadors at the Court of Charles II

Ekaterina Yurchik
When in Russia have Known about the Death of the King Philip IV of Spain? One Case in the History of Russian-Spanish Relations

Vladimir Védyushkin
At the Origins of the Study of Muslim Spain in Russia: the Book of K. L. Kustodiev about Christians of al-Andalus