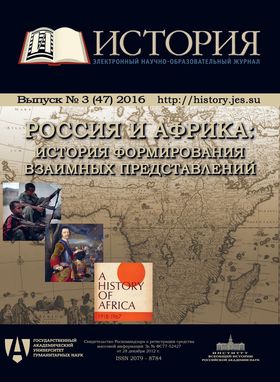 This issue is prepared by joint efforts of the Center for African Studies (Institute of World History, Russian Academy of Sciences) and our colleagues and is based on the reports presented at the international conference “Russia and Africa: History of Mutual Representations”, which was organized in Moscow on October, 8—9, 2015 as part of research project “Africa in the Destiny of Russia, Russia in the Destiny of Africa”. We fully realized that the conference can not cover all the aspects of such large and important theme as mutual representations of the peoples from African continent and the peoples of Russia in its historical development. The preparatory activities confirmed that following substantial limitation of bilateral contacts we feel obvious lack of professional researchers dealing with these themes. Thus we formulated an important task both for the grant research and conference preparation as the first step to realize the research — to look for new talented persons and to enhance the chronology and problematic of the theme.

The issue prepared did not include all the reports at the conference as many authors who participated has just outlined their research interest and did not bring their work up to the end. At present stage of our joint work we did not formulate the task to illustrate all the aspects of interstate, diplomatic, political, economic, cultural, educational links and resulting representations of African and Russian peoples. That did not allow us to divide the issue for the thematic parts.

First of all we tried to outline the principle periods in formatting these representations (A. Davidson). Vast archive materials enable us to realize the specific development of interstate relations between Russian Empire and Ethiopia, the only independent state in 19th century at African continent (G. Tsypkin). To this edge of 19—20th centuries belong the contacts between the sailors from Rozhdestvensky fleet and the Africans in different ports of West and Sothern Africa (A. Kozvonin) as well as the impressions of Russian migrants who were trying to overcome difficulties in the southern part of the continent (A. Balezin).

What was the position of Africa within the USSR international preponderances can be illustrated by the development of relations with not the largest countries of the continent — former Portuguese colonies (A. Tokarev) and Somalia (L. Ivanova). Not less interesting are the vivid impressions of Soviet specialists who worked in the heart of Africa (E. Tsvetkov). One can see that political and diplomatic traditions are forming in modern complicated conditions the development of interstate relations between Russia and South Africa and Kazakhstan and Africa (V. Shubin and S. Azerbayev)

One more important side of Russian-African relations was and still is the history of the publications which develop the image of African personality especially when we deal with such charismatic figure as K. Nkruma (S. Mazov). Through all the periods of Russian-African relations our country was rather often an object of strict attention of the Africans who travelled here (M. Kurbak). And those African-Americans who lived here for a long time added much to the store of mutual representations of black and white peoples (N. Scherbakov).

Today the accumulation of mutual representations is going on not less intensive due to the expanding educational relations especially in the last years (A. Voevodsky). All the authors of this issue are using numerous archive materials and other documents and issues which enrich the complicated outlook which characterizes the establishment and development of African image with Russian peoples and the image of the peoples of Russia in Africa.

We continue the work on the theme highlighted in this issue. In the coming period we hope to enlarge the number of authors and the themes they dwell upon to prepare our book which will show the comprehensive history and modern state of mutual representations, mutual evaluations and prospects for the development of relations between the peoples of Russia and Africa.

Salavat Azerbaev
Subjects of Russian Empire — a Failed Attempt to Settlement in Africa. “Russian Germans” from Volhyn in German East- and South West Africa in Early 20th Century (Based on Archival Sources)

Lubov Ivanova
Africans through the Eyes of the Russians in 1904—1905 (Memories, Diaries and Letters of Members of the Second Pacific Squadron)

Sergey Mazov
Relations between Democratic Republic of Sao-Tome and Principe and USSR / Russia, from 1975 till now