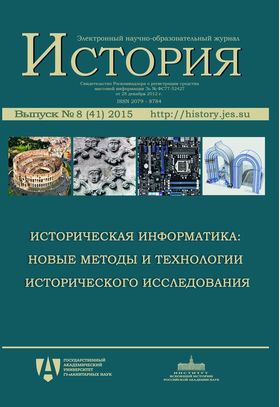 The mankind has entered the “digital age” in the 21st century. Information and communications technology (ICT) is now inclusive into all aspects of society activities, in all sectors of economy. ICT plays a special role in the development of research and education. This process also touched upon the historical research and education as well as preservation and study of historical and cultural heritage.

This issue of the journal is aimed to discussion of problems, prospects and results of the interdisciplinary research area associated with the use of digital technology and computer methods in historical research. This area is traditionally called in Russia “istoricheskaya informatika”, that was called internationally Historical Computing (or Historical Information Science) for a quarter of a century, and in recent years in the context of digital turn is associated mainly with Digital History (regarded as part of a wider multidisciplinary area of Digital Humanities).

The impetus for the preparation of this thematic issue was generated by the anniversary of the Department of Historical Information Science at the History Faculty of Moscow State University, which noted in December 2014 the first decade of its existence. The Department has been transformed from the Laboratory of Historical Information Science, established on the initiative of academician Ivan Koval'chenko in 1991.

The articles presented in this issue reflect the range of research conducted in recent years at the Department. They are grouped by sections, including the methodological aspects of developing Historical Information Science and the results of recent research based on computerized analysis of historical texts, methods of 3D-modeling reconstruction of historical and cultural heritage, application of mathematical models and statistical methods in studies of socio-political and economic processes of the past.

Contributors of this issue are professors, lecturers and PhD students of the Department of Historical Information Science at the History Faculty of Moscow State University.

editing by: E. Filippova, B. Yablokov

Issue publications 8 (41)
Author(s)
The Historian in the World of Computer Technology: Spiral Development?

Leonid Borodkin
Digital History: the Craft of Historian in the Digital Age

Denis Zherebyatiev / Kim Olga
Modern Approaches to 3D-Reconstruction of Objects of Cultural Heritage: the Problem of Visualization and Perception (the Examples of the Moscow Passion Monastery and Chudov Monastery of the Moscow Kremlin)

Daria Anisimova
Non-Ferrous Metals of the USSR: Their Production and Trade in 1917—1966

Lyudmila Lyagushkina
“Counter-revolutionary crimes” (1935—1937): Analysis of Occurrence Frequency of the Paragraphs of Article 58 of the RSFSR Criminal Code During the Repression in the Altai Region