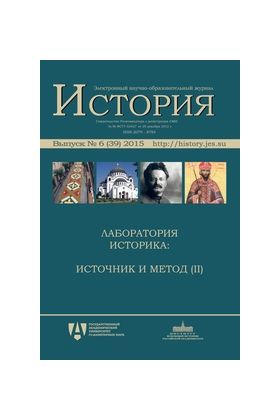 The present issue of the electronic journal “History” consists of papers sent to the editorial board in the late 2013 — the early 2015. The papers are dedicated to various problems and periods: from the late Antiquity to the early 20th century, and from the archaeology of the Sarmathians to modern international relations.

For the purposes of convenience we allocated the articles in chronological order. Nevertheless, it seems important to indicate three groups of papers which have a special origin.

Firstly, these are papers written as proceedings of a round table “Ethnic groups, peoples, and nations in Europe and Russia from the Middle Ages until the present day”, held in the Historical Faculty of the State Academic University for Humanities on March, 22, 2012 (organizers: Alexey Bakanov and Sergey Denisov). These include articles by S. A. Denisov, Yu. Ya. Vin and T. A. Belyakova.

Secondly, in 2014 a volume of articles appeared in a small run of copies, dedicated to the anniversary of Marina V. Vinokurova, a member of the editorial board of the present issue (Istochnikovedcheskie issledovanija / ed. by Samuil Volfson and Timofey Guimon. Moscow 2014. Vol. 6). We considered it possible to place here upgraded versions of some of the papers of that volume. These are articles by M. V. Zemlyakov, M. M. Drobysheva, T. V. Guimon and L. M. Orlova-Guimon, E. A. Prusskaya, P. A. Datsenko, N. V. Kovalenko.

Thirdly, several papers concerned with religion and church in Russia in the late 19th and the early 20th century have been collected for this issue by Aleksey Beglov and Nadezhda Belyakova, to whom we are very grateful. These are papers by A. L Beglov, V. B. Aksenov, N. I. Potapova, A. V. Mazyrin, N. A. Belyakova.

Evgeny Vdovchenkov
The laws of 7th-century kings of Kent in Textus Roffensis: Their origin and structure

Mikhail Zemlyakov
The Difficulties of Reading and Interpretation of Old Rus Graffiti (the Inscription Vys. 1 as Example)

Sergey Denisov
Village Community of Late Byzantium (the 13th — 15th centuries) in the Conditions Ethno-Cultural and Confessional Conflicts: An Attempt at Historical Reconstruction of Late Byzantine Community as Intra-Ethnic Group

Yury Vin
Annalistic Source of the Historical Notes in the Margins of an Easter Table in MS. RGB. 304.I.762 (the 15th Сentury)

Alexey Frolov
How did the fortress Kazikermen look in 1695?

Anna Sidiakina
The Russian Diplomats' Reports and the United States of Belgium, 1789—1790's: Revolutionary Political Discourses in the Diplomatic Correspondence

Ilia Rozhdestvensky
News from Russia in the Newspaper of Frankfurt, 1810–1811

Pavel Datsenko
The Unstudied Issues in the History of Russian America: on the Question about the Activity of the Priest Frumenty Mordovsky in Kodiak Parish in the 1820's

Michael Dubrovin
The Records of the Orthodox Parish of the Russian Empire in the Late 19th — Early 20th Century: Social Aspect

Alexey Beglov
Faith and Mass Consciousness: Rastserkovleniye of the Russians in 1907—1917

Vladislav Aksenov
Russian-Ukrainian Emigrants Baptists and Evangelicals Christians in the United States and Canada, 1916—1922: Problems of Identity and Relationship with the Russian Co-Religionists

Aleksander Mazyrin
Trotsky and his Correspondents: Trotskists Letters as a Source on the Inner Struggle in the Bolshevik Party and the Oppositions in the late 1920's and the early 1930's

Nadezhda Kowalenko
Magnitogorsk: From the First Tent to the First Soviet City

Sergey Gres
Moscow Students at the Peak of “Great Terror”

Irina Volkova
Body, Consciousness and Worldview of a “Special Settler” in the Soviet System of Forced Labor: The Preservation of Lithuanian Ethnic and Religious Identity in Exile in Buryat-Mongolia Revisited