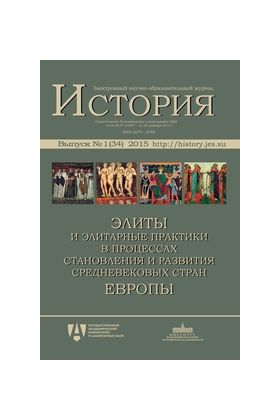 Elites and Elitist Praxis in the Processes of State Formation and Development in the Medieval Europe
Editors: Elena Melnikova , Aleksey Schavelev
800 RUB / 10.0 SU

The Epoch of Middle Ages was a time of separation of most societies on the “silent majority» of “working class” (according to the metaphor of A. J. Gurevitch) and elite groups of “belligerent" and “praying” (according to G. Duby), clearly representing themselves in the texts and artifacts. Whether we like it or not, but modern historians have to observe the Middle Ages by the agency of the people belonged to the dominant social strata, possessed sophisticated writing and artistic culture. Therefore the study of the Barbaric and then Feudal Europe will always be connected with the study of its elites, elite practices and ideology of the elite and its worldview.

In Medieval societies “iron law of oligarchy” acted consistently and clearly. The processes of formation, rotation and then setting of social hierarchies were based on a discriminatory towards masses military and intellectual elitism. The emergence of the elite-class had always been a key process of any, especially initial, politogenesis. In particularly a bright example of this process was the genesis of states (“state-genesis”) in Early Middle Ages in Eurasia. The presence or the absence of any elite strata (clergy, professional soldiers, bureaucrats, intellectuals, and others) is a vivid sign of the level of development and / or the type of political system of society. Often, the type (or peculiarities) of the elite programs the whole model of society.

Introduced issue of a journal continues and develops the research line, which was started in 2012 year by the issue № 5 (13) “The Beginnings of the Old Russian state”. The new issue contains a variety of researches, concerning different types of elite and their attributes and ways of representation. The chronological interval is very wide — the 3th — the 16th centuries.

The first block of papers consisted of nine papers, in which the problems of Medieval Rus’ are studied. This block represents the problems of research of the continuity and evolution of elite strata in Rus’ from the genesis of State to the last centuries of Middle Ages.

The next special quaternion connects with the problems of historical research of the world of Eurasian nomads, which were the integral part of the medieval civilization of Europe.

In sum we have a stereoscopic representation of different ages and regions constituted the Epoch, marked as “Medieval” and “European”.

Dmitry Borovkov
Who Founded the “Vydubich’ski” Monastery of St. Michael in Kiev?

Yuri Artamonov
Between Church and Palace: “Polaty” (Upper Galleries) of the Earliest Russian Cathedrals (on the Origin of the Term)

Lyubovj Stolyarova
The Death as a Tool of Political Propaganda: the Downfall of Emperor Valerian in the Descriptions of Roman Historians

Tatyana Kalinina
Whether the Pecheneg Allies of Byzantines Were the «Christ-loving Host»?